Pelicans in the Shuswap 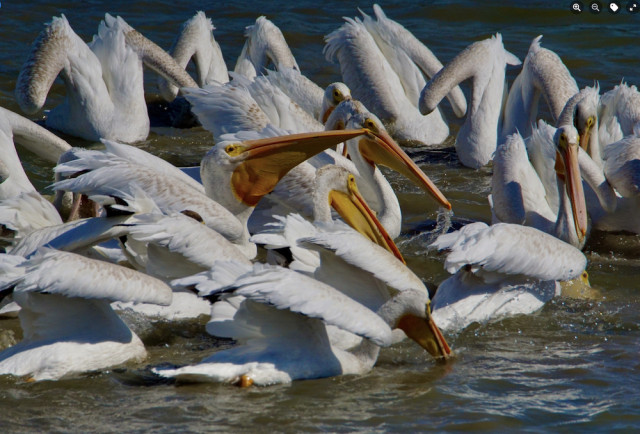 Former Vernon educator and current photographer extraordinaire Tom Skinner took a trip to the Shuswap recently where he found a flock of white pelicans.

“Everywhere I looked I saw something fascinating,” Skinner said of his most recent trip to Salmon Arm.

“The Pelicans were in very shallow water and split into small groups to try to catch fish. One pic shows a group splitting into a circle.”

While pelicans may seem out of place for the Shuswap, they can be seen in the Salmon Arm area as well as the North Okanagan every year.

“In the summertime, there are often pelicans on Shuswap Lake right at Salmon Arm,” said Skinner. “About 50 per cent of the world's white pelican population are found between British Columbia and Manitoba.”

White Pelican Provincial Park is located on Stum Lake in the Chilcotin region of B.C. and the big birds stop in the region on their way to and from the lake.

According to the park's website, the lake is closed to the public from March 1 to Aug. 31 every year to protect the white pelican nesting colony.

Canoeing, boating, hunting, trapping, discharge of firearms, aircraft operation below 600 metres in elevation and aircraft landing are prohibited on Stum Lake due to the birds nesting there, the only nesting colony in British Columbia.

The big birds are very sensitive to disturbances which can result in the loss of all young. Pelican viewing opportunities exist at Nazko Lake Park and in other lakes in the Chilcotin.