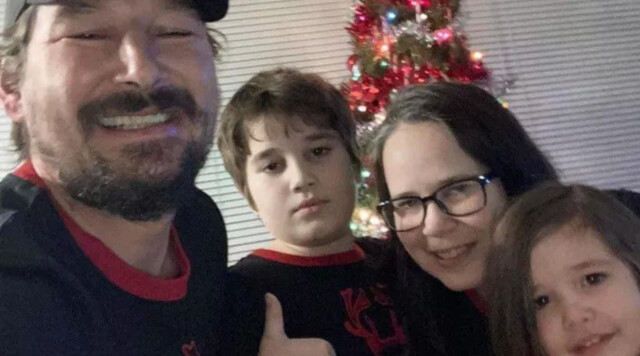 Photo: GoFundMe
The two people killed in a head-on collision near Salmon Arm earlier this month have been identified as Mike and Robin Martel. A GoFundMe page has been set up to support their two surviving children, who were seriously injured in the crash.

Two young children are recovering from serious injuries in a Vancouver hospital after a head-on collision near Salmon Arm earlier this month — a crash which killed both their parents.

According to police, emergency crews were called to Highway 1 near Kirkpatrick Road in Tappen on Oct. 2 after an SUV carrying four people collided with a semi truck.

Mike and Robin Martel were pronounced dead at the scene, while their two children, eight-year-old Maverick and five-year-old Bailee Jo — were taken to hospital.

According to an online fundraiser set up to support the children, the collision happened while the family was moving to a new home.

The GoFundMe account was organized by Nadine Bouchard, who identifies herself as a relative.

“The sudden death of Mike and Robin is heartbreaking news to their families and friends,” Bouchard wrote.

“Mike and Robin leave for us to cherish their babies, Maverick and Bailee Jo, the loves of their lives.”

Mark Deshane, vice president of the Whalley Little League, told Castanet News the family of four had been involved with the Lower Mainland baseball community, which is now rallying around the surviving children.

“They're young kids, so they haven't been in the league a long time — the boy is only eight — but it's just a tragic, tragic situation, and the league is pulling together to do what we can to help the aunt who is willing to take them on and raise them from here on,” Deshane said.

Deshane said he is in contact with family members who have come from Saskatchewan to be with the children while they are in hospital.

“The kids are seriously injured. Not only have they lost their parents, but they are also both seriously injured and struggling in [BC Children's Hospital] with very significant injuries. And it will take a long time for them to recover from their physical injuries, let alone their mental injuries and loss of their parents. So they're in for a rough ride,” Deshane said.

In a post on the Whalley Little League Facebook page, Deshane said Maverick and Bailee Jo will join their small extended family in Saskatchewan when they are able.

Recovery and rehab will involve extensive travel, with the GoFundMe set up to help reduce the financial burden of future care. Any additional money raised through the online fundraiser will be set up in a trust fund for the children’s future.

The GoFundMe page can be found here.