69-year-old woman falls through the ice at Swansea Point 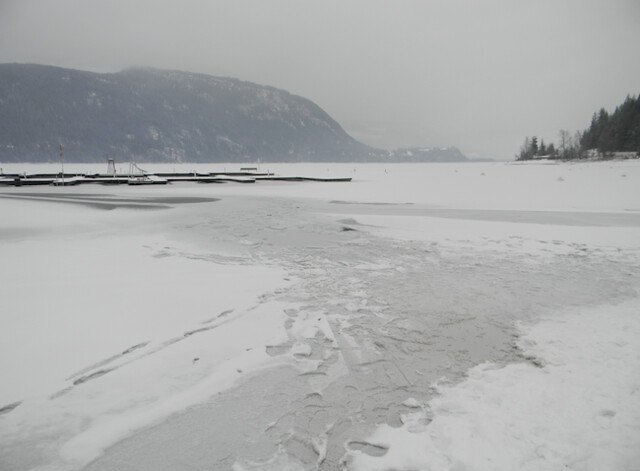 After falling through the ice near Swansea point on Mara Lake Monday night, a 69-year-old woman was able to call 911 while clinging to the ice.

“The woman was pretty lucky that she had her phone with her and was able to call 911,” says Sgt. Murray McNeil of the Sicamous RCMP.

With only her head out of the water, the woman was able to describe her surroundings and police were able to use her cell phone GPS to locate her.

The first officer to arrive on scene “tried to shimmy to her on his belly,” but ended up falling through the ice as well. "The water was probably over six feet, it was over everyone's head."

Help from both Sicamous and Swansea Fire Departments was on its way as the officer and woman were now both immersed in the icy water.

The second officer on scene also fell through the ice explains McNeil.

McNeil estimates the woman spent 40 minutes in the water and the first officer spent about 15 while the second officer, less than five minutes. Firefighters used ropes and ladders from shore and technicians with the Ice Rescue team were able to perform the rescue while being in dry suits.

The woman was transported to Vernon Jubilee Hospital and has since been released. McNeil says she reached out this Tuesday morning to thank everyone involved and knows the outcome could have been much different without the help of everyone involved.

At the height of the rescue, about 12 members of the two fire departments and RCMP were involved as well as two ambulance crews.

McNeil adds the Firefighters involved were up to the task as they had recently completed Water and Ice training.