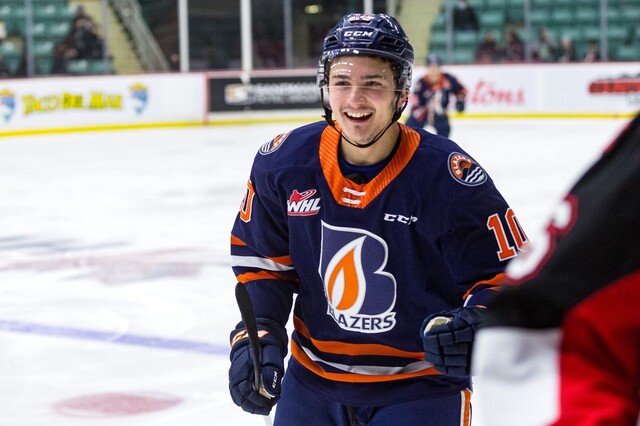 Photo: James Doyle/Prince George Cougars
Newcomer Luke Toporowski celebrates a goal on Friday in Prince George, his first game as a Kamloops Blazer. Toporowski scored twice and added an assist as the Blazers beat the Cougars 5-1.

Luke Toporowski scored twice and added an assist Friday in Prince George, leading the Kamloops Blazers to a 5-1 win over the Cougars.

The game was Toporowski’s first the with Blazers. The overage forward was acquired in a trade with the Spokane Chiefs on WHL trade deadline day on Monday.

He didn’t take long to make an impact. Toporowski opened the scoring three minutes into the first period on Friday. He assisted on Stankoven’s goal mid-way through the second, then scored his second three minutes later.

Fellow newcomer Drew Englot, a 19-year-old forward acquired Monday in a trade with the Regina Pats, also had a big night, tallying two assists and winning 15 of 17 faceoffs.

Toporowski was playing on the first line alongside Stankoven and Caedan Bankier. Englot was centring Kuefler and Belton on the third line.

The Cougars were playing with a short bench, dressing 14 skaters in front of 1,847 fans at CN Centre.

The Cougars fall to 17-18-1-1 on the season, four points behind Kelowna in third place in the division.

Both teams will meet again on Saturday, this time at Sandman Centre. Puck drop is slated for 7 p.m.