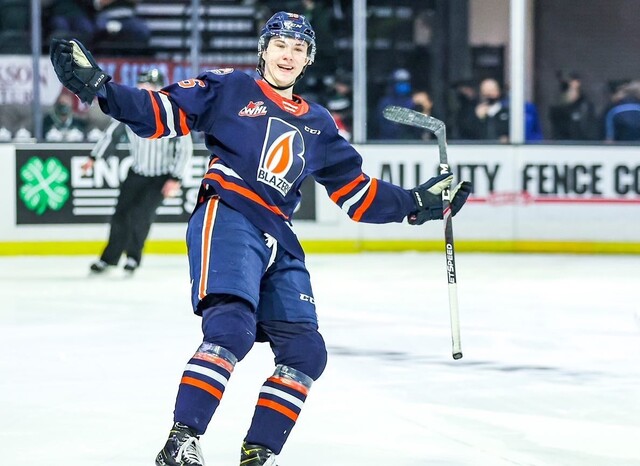 A fourth Kamloops Blazer has been selected at the NHL Draft in Montreal.

Forward Daylan Kuefler was drafted by the New York Islanders on Friday in the sixth round, 174th overall.

He joins Fraser Minten, Mats Lindgren and Matthew Seminoff, who heard their names called earlier in the day.

Kuefler, who is from Stettler, Alta., managed 38 goals and 21 assists in 65 games played last season — his third with the Blue and Orange.

Another Kamloops Blazers skater has been selected at the NHL Draft in Montreal.

Forward Matthew Seminoff was drafted by the Dallas Stars in the sixth round on Friday, 179th overall.

He joins Fraser Minten and Mats Lindgren, who heard their names called earlier in the day.

Seminoff, who is from Coquitlam, put up 26 goals and 31 assists last year for the Blazers.

Seminoff becomes the latest Blazer to be drafted by the Stars, a club owned by Blazers majority owner Tom Gaglardi.

Two Kamloops Blazers heard their names called on Friday morning at the NHL Draft in Montreal.

Forward Fraser Minten was selected by the Toronto Maple Leafs in the second round, 38th overall, and D-man Mats Lindgren was drafted by the Buffalo Sabres in the fourth round at 106th overall.

Minten scored 20 goals and added 35 assists last season, his second with the Blue and Orange.

Lindgren, who is from North Vancouver, scored five goals and 39 assists last season with a plus-25 rating.