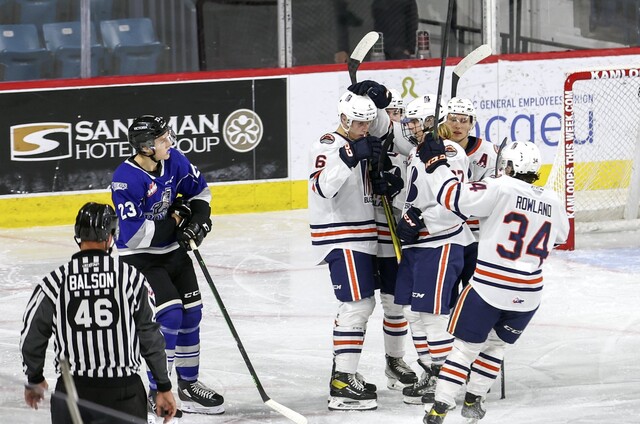 Photo: Allen Douglas/Kamloops Blazers
The Kamloops Blazers celebrate a goal during a pre-season game against the visiting Victoria Royals on Sept. 14 at Sandman Centre.

When the puck drops on the Kamloops Blazers’ monumental season on Friday at Sandman Centre, the Blue and Orange will take to the ice with a big target on their backs.

The Blazers, who will host the Memorial Cup next spring, are fifth in the pre-season CHL Top 10 rankings.

The Winnipeg Ice, who were dominant for much of last season before bowing out in the WHL Eastern Conference championship series, top the pre-season poll, followed by the Quebec Remparts, the Seattle Thunderbirds and the Guelph Storm.

After the Blazers at No. 5 are the Gatineau Olympiques, the Flint Firebirds, the Mississauga Steelheads, the Sherbrooke Phoenix and the Moose Jaw Warriors.

The Blazers are expected to be without many of their core players when the Portland Winterhawks visit Sandman Centre for Friday’s season opener. Logan Stankoven (Dallas), Fraser Minten (Toronto), Daylan Kuefler (NY Islanders), Caedan Bankier (Minnesota), Matthew Seminoff (Dallas), Kyle Masters (Minnesota) and overager Drew Englot (Colorado) are away at NHL camps and could stick for some time.

Goaltender Dylan Ernst is expected to start in net for the Blazers on Friday. He did not receive an invite to the Carolina Hurricanes main camp and is expected to return to Kamloops from North Carolina in the coming days.

After Friday’s game against Portland, the Blazers will be off for more than a week, playing their second game of the regular season on the road on Oct. 1 against the Spokane Chiefs.