Blazers shut out in opener 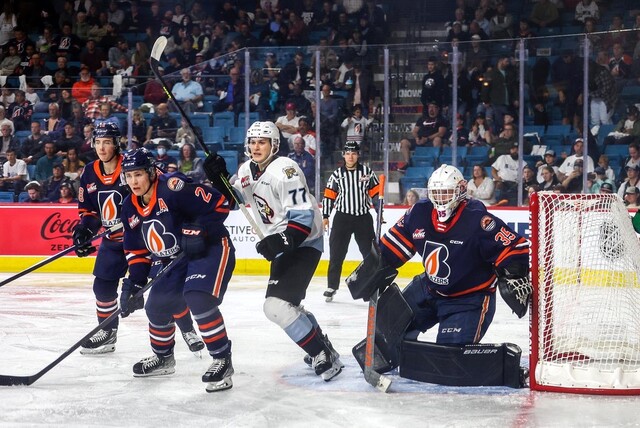 Despite some good chances late in the third period, the Kamloops Blazers were held scoreless Friday at Sandman Centre, shut out 3-0 by the Portland Winterhawks on the opening night of the WHL season.

Dylan Ernst was solid in net for the Blazers, stopping 35 of 38 Portland shots, but Kamloops couldn’t muster any scoring despite five power play chances in front of an announced crowd of 4,485.

Gabe Klassen opened the scoring 94 seconds into the game while Drew Englot was in the penalty box for boarding. Marcus Nguyen scored at 5:52 of the second period and Klassen added another at 17:14 of the third.

The Blazers start the season without eight veterans, including Logan Stankoven and Fraser Minten, who are away at NHL camps. Expectations are high for the club, which is hosting the Memorial Cup next spring.

The Blazers will have to wait a while before their next crack at the win column. Game 2 on the season will go next Saturday, Oct. 1, in Spokane against the Chiefs. Their next home game is Oct. 7, when the Victoria Royals visit Sandman Centre.

The Kamloops Blazers will open their regular season against the Portland Winterhawks. Puck drop is slated for 7 p.m., but the festivities will begin at 5 p.m. with $5 burgers and beers on offer at the Norkam Mechanical Group Lounge.

Expectations are high for the Blazers, who will host the Memorial Cup next spring. The club is coming off three consecutive B.C. Division titles and is ranked fifth in the CHL’s pre-season Top 10 ranking.

The Blazers will start the season short-handed, with eight key players — including Logan Stankoven, last year’s CHL player of the year — away at NHL training camps.

After Friday, the Blazers will be off for more than a week. Game 2 of the season is scheduled for Oct. 1 on the road against the Spokane Chiefs.

The Blazers took to social media on Friday morning to remind fans about construction on Lorne Street — work that could make getting to the game a challenge for some. The team is encouraging fans to plan ahead with the road work in mind.

Like previous seasons, Castanet Kamloops will once again cover the Blazers from start to finish.

Each game night, check Castanet Kamloops for a summary of the evening's action and a look ahead at what's next.