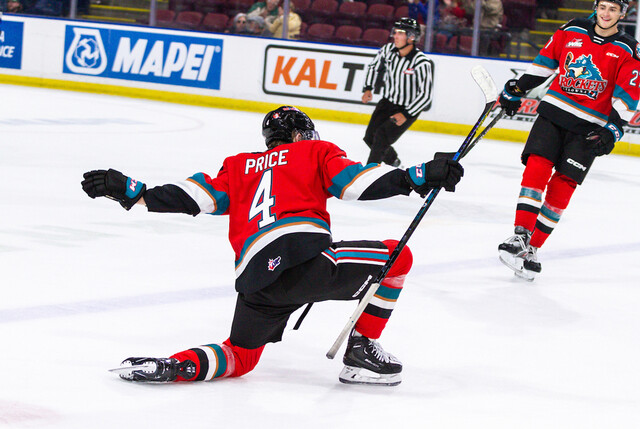 It was a relatively quiet night for Kykkanen who turned away all 20 shots he faced, including just one in the second period to earn the goose egg, his second straight against the Royals. He also had a quiet 15 save effort in a 5-0 win back in April.

He saved his best save for last, getting a blocker on a shot from in close at the end of a three-on-one.

"I thought he was seeing the puck quite well, but that last little sequence, they had a couple of looks when they had more traffic in front, but that's what he has to do," said head coach Kris Mallette.

"Regardless of how many we are giving up, he's got to be the guy that makes those routine saves, and he did that tonight."

Mallette also credited the entire defence corp for clearing out the front of the net when they had to and getting in front of shots.

"I think it got a little scrambly at times, but for the most part...it's a work in progress for us in our defensive zone.

"I thought the sacrifice was there and it actually turned into a few offensive zone chances when we were able to block shots and take off on a few odd man rushes. That's what's asked of the players...the game is all about sacrifice."

Kydd, Marcus Pacheco and Caden Price provided all the offence the Rockets would need.

Pacheco opened the scoring on the power play, pulling the trigger from the slot following a pretty three-way passing play with Kydd and Gabriel Szturc.

Price, who was rock steady on the evening at both ends of the ice, bagged his first of the season on a seeing-eye shot from the the half wall just inside the blueline.

"I was talking with our D-coach and we've been working on trying to move my feet when I'm on the blueline," said Price.

"I saw a lane, there was a good screen out front. I saw the entire lane, threw the puck there and it went in."

The second period was scoreless, despite the Rockets outshooting Victoria 12-1.

Kydd salted the game away in the third, beating Tyler Palmer on a partial breakaway off a perfect pass from Andrew Cristall.

The Rockets top line was in on two of the three goals and had good chances for more but, despite the offensive output, Mallette says he wasn't happy with the trio.

"I actually almost was going to sit those guys to be honest. Production is one thing, but I wasn't happy with their habits at all.

"I thought they were extending some shifts, they were trying to overcomplicate some things. They are a skilled group and got some goals as per usual, but I was really, really happy with the other lines and their work ethic.

The Rockets got a bit of a scare when forward Turner McMillen was sent to the ice with what looked like a knee-on-knee collision from Royals defenceman Luke Rybinski in the final minute.

McMillen stayed down for a few anxious moments, but was able to skate off the ice without any assistance.

The Rockets, 2-1-1-0 on the season, host Seattle Friday in a rematch of last season's first round playoff series which Seattle won in five games.