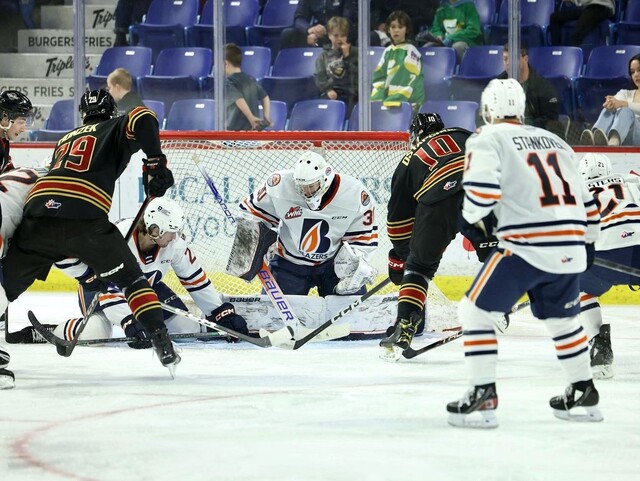 The Kamloops Blazers could not hold on to their lead on Saturday in Langley, dropping a 6-5 decision to the Vancouver Giants in a shootout.

The Blazers led 5-4 late in the third when Lipinski tied the game with 80 seconds remaining. A back-and-forth overtime solved nothing and the Giants won in the shootout.

Jesper Vikman made 45 saves on 50 Kamloops shots to earn the win in net. Michael Schnattinger stopped 32 of 37 Vancouver shots in a losing effort.

The Blazers were scoreless on one power-play opportunity. The Giants scored twice on three chances.

The Blazers will now catch a ferry to Vancouver Island for a pair of midweek games against the cellar-dwelling Royals (3-20-3-0), who were shut out 3-0 on Saturday by the Seattle Thunderbirds (17-4-1-0). The Blazers and Royals will play on Tuesday and Wednesday at Save-On Foods Memorial Arena in the provincial capital.

The Blazers will be home for a pair at Sandman Centre next weekend, hosting the Giants on Friday and the Royals on Saturday. Puck drop both nights is 7 p.m.