A West Kelowna man captured a rare celestial phenomenon on video from his home in Glenrosa.

Sean Perdue tells Castanet he took up photographing the stars a couple of years ago after being inspired by the NEOWISE comet which was visible in the Okanagan in 2020.

"I was never interested in photography. This comet (NEOWISE) kind of inspired me. I bought a little telescope and started taking shots with my cell phone just through the eyepiece of the telescope of Jupiter and Saturn. I thought it was the coolest thing ever," says Perdue.

In the past two years Perdue has expanded his photography skills and equipment to the point where he is capturing breathtaking shots and videos.

"I saw your story on the green comet passing by earth so I went out and got some shots of it through my telescope this past weekend. ... The video shows the comet's movement over a 2.5 hour period."

Perdue says his set-up is computerized and controlled remotely by his phone.

"It's a mini-computer which is connected to everything, the camera, and there's a tracking mount. That's all computerized so that it follows the stars as they move. I just program it through my phone to take [different] exposures," said Perdue.

The green comet currently passing by hasn't been seen in British Columbia for 50,000 years and is technically known as C/2022 E3 (ZTF). Tt was first spotted in March of 2022.

According to Marley Leacock, an astronomer at the H.R. MacMillan Space Centre in Vancouver, this could also be the last chance to get a glimpse of this comet before it leaves our solar system.

"By definition, a hyperbolic orbit means that the object will only enter the solar system once, so comet C/2022 E3 (ZTF) may leave our solar system entirely," Leacock said.

The comet is difficult to see with the naked eye but will be at its most visible the first days of February.

Perdue says he got his shots and video between 3 a.m. and 5 a.m.

"I want to get a lot better," Perdue says he's hooked on astrophotography and says he likes to focus on what he calls the star-forming regions of space, "they're basically big space clouds." 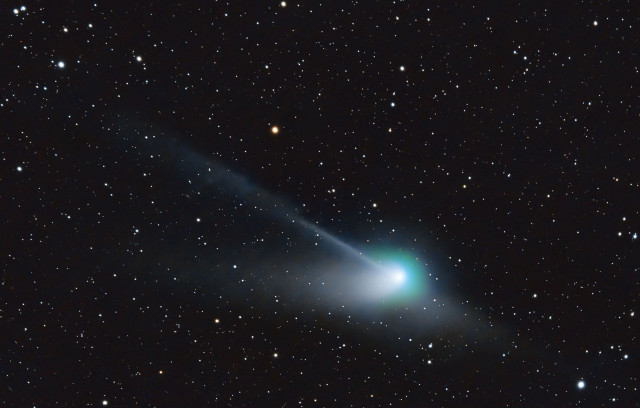