Nuclear plant fire is out 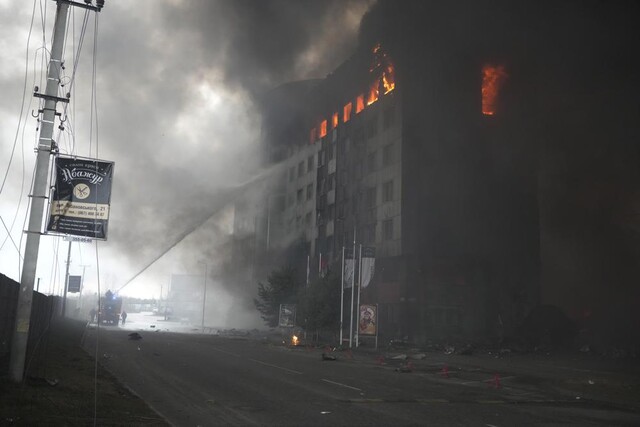 Photo: The Canadian Press
Firefighters hose down a burning building after bombing in Kyiv, Ukraine, Thursday, March 3, 2022. Russian forces have seized a strategic Ukrainian seaport and besieged another. Those moves are part of efforts to cut the country off from its coastline even as Moscow said Thursday it was ready for talks to end the fighting. (AP Photo/Efrem Lukatsky)

A fire at Europe’s biggest nuclear plant ignited by Russian shelling has been extinguished, Ukrainian authorities said Friday, and Russian forces have taken control of the site.

There was damage to the compartment of reactor No. 1 at the Zaporizhzhia plant in the city of Enerhodar, but it does not affect the safety of the power unit, the regional military administration said in a statement. It added that operational personnel are ensuring its safety. No information was immediately available about casualties. Ukrainian officials said that radiation levels in the area weren’t at dangerous levels.

The shelling of the plant came as the Russian military pressed their attack on a crucial energy-producing Ukrainian city and gained ground in their bid to cut off the country from the sea. As the invasion entered its second week, another round of talks between Russia and Ukraine yielded a tentative agreement to set up safe corridors to evacuate citizens and deliver humanitarian aid.

Leading nuclear authorities were worried — but not panicked — about the damage to the power station. The assault, however, led to phone calls between Ukrainian President Volodymyr Zelenskyy and U.S. President Joe Biden and other world leaders. The U.S. Department of Energy activated its nuclear incident response team as a precaution.

Earlier, nuclear plant spokesman Andriy Tuz told Ukrainian television that shells fell directly on the facility and set fire to one of its six reactors. That reactor is under renovation and not operating, but there is nuclear fuel inside, he said.

The Zaporizhzhia regional military administration said that measurements taken at 7 a.m. Friday (0500 GMT) showed radiation levels in the region “remain unchanged and do not endanger the lives and health of the population.”

The mayor of Enerhodar, Dmytro Orlov, announced on his Telegram channel Friday morning that “the fire at the (nuclear plant) has indeed been extinguished.” His office told The Associated Press that the information came from firefighters who were allowed onto the site overnight.

The assault renewed fears that the invasion could damage one of Ukraine’s 15 nuclear reactors and set off another emergency like the 1986 Chernobyl accident, the world’s worst nuclear disaster, which happened about 110 kilometers (65 miles) north of the capital.

British Prime Minister Boris Johnson called for an emergency meeting of the U.N. Security Council in “coming hours” to raise the issue of Russia’s attack on the nuclear power plant, according to a statement from his office.

U.S. Energy Secretary Jennifer Granholm tweeted that the Zaporizhzhia plant’s reactors were protected by robust containment structures and were being safely shut down.

The office of British Prime Minister Boris Johnson says he will seek an emergency U.N. Security Council meeting after Russian troops in Ukraine attacked a nuclear power plant and sparked a fire.

Johnson’s office says he spoke to Ukrainian President Volodymyr Zelenskyy in the early hours of the morning. He says Britain will raise the issue immediately with Russia and close partners.

Johnson’s office says he and Zelenskyy agree Russia must immediately cease attacking and allow emergency services unfettered access to the plant. The two agree a ceasefire is essential.

“The Prime Minister said the reckless actions of (Russian President Vladimir) Putin could now directly threaten the safety of all of Europe,” Johnson’s office said in a statement. “He said (the United Kingdom) would do everything it could to ensure the situation did not deteriorate further.”

Canadian Prime Minister Justin Trudeau says he also spoke with Zelenskyy about the attacks on the power plant.

“These unacceptable attacks by Russia must cease immediately,” he said on Twitter.

The International Atomic Energy Agency said on Twitter that it’s been informed by Ukraine’s nuclear regulator that “there has been no change reported in radiation levels” at a nuclear power station shelled by Russian troops.

The agency said its Director General Mariano Grossi was in touch with Ukraine’s Prime Minister Denys Schmygal and the Ukrainian regulator and operator about the situation at the Zaporizhzhia plant.

Grossi “appeals for halt of use of force and warns of severe danger if reactors hit,” the IAEA said in another tweet.

An official in Ukrainian President Volodymyr Zelenskyy’s office, not authorized to speak publicly and speaking on condition of anonymity, said the reactors have not yet been damaged and radiation levels are normal.

Russian forces pressed their attack on a crucial energy-producing city by shelling Europe’s largest nuclear plant early Friday, sparking a fire and raising fears that radiation could leak from the damaged power station.

Plant spokesman Andriy Tuz told Ukrainian television that shells were falling directly on the Zaporizhzhia plant in the city of Enerhodar and had set fire to one of the facility’s six reactors. That reactor is under renovation and not operating, but there is nuclear fuel inside, he said.

A government official told The Associated Press that elevated levels of radiation were detected near the plant, which provides about 25% of Ukraine’s power generation. The official spoke on condition of anonymity because the information has not yet been publicly released.

Tuz said firefighters cannot get near the flames because they are being shot at. Ukrainian Foreign Minister Dmytro Kuleba tweeted a plea to the Russians to stop the assault and allow fire teams inside.

“We demand that they stop the heavy weapons fire,” Tuz said in a video statement. “There is a real threat of nuclear danger in the biggest atomic energy station in Europe.”

The attack renewed fears that the invasion could result in damage to one of Ukraine’s 15 nuclear reactors and trigger another emergency like the 1986 Chernobyl accident, the world’s worst nuclear disaster, which happened about 110 kilometers (65 miles) north of the capital.

The mayor of Enerhodar said earlier that Ukrainian forces were battling Russian troops on the city’s outskirts. Video showed flames and black smoke rising above the city of more than 50,000, with people streaming past wrecked cars, just a day after the U.N. atomic watchdog agency expressed grave concern that the fighting could cause accidental damage to Ukraine’s 15 nuclear reactors.

“Many young men in athletic clothes and armed with Kalashnikovs have come into the city. They are breaking down doors and trying to get into the apartments of local residents,” the statement from Energoatom said.

Later, a live streamed security camera linked from the homepage of the Zaporizhzhia plant showed what appeared to be armored vehicles rolling into the facility’s parking lot and shining spotlights on the building where the camera was mounted.

There were then what appeared to be bright muzzle flashes from vehicles, followed by nearly simultaneous explosions in the surrounding buildings. Smoke then rose into the frame and drifted away.

The fighting at Enerhodar came as another round of talks between the two sides yielded a tentative agreement to set up safe corridors inside Ukraine to evacuate citizens and deliver humanitarian aid.

Elsewhere, Russian forces gained ground in their bid to cut off the country from the sea, as Ukrainian leaders called on citizens to rise up and wage guerrilla war against the invaders.

While the huge Russian armored column threatening Kyiv appeared bogged down outside the capital, Vladimir Putin’s forces have brought their superior firepower to bear over the past few days, launching hundreds of missiles and artillery attacks on cities and other sites around the country and making significant gains in the south.

Ukrainian Prime Minister Denys Shmyhal called on the West to close the skies over the country’s nuclear plants as fighting intensified. “It is a question of the security of the whole world!” he said in a statement.

The U.S. and NATO allies have ruled out creating a no-fly zone since the move would pit Russian and Western military forces against each other.